If you’re reading this and have not read my first Word Nerds post please do go back and read it because I’m going to refer to things here that are explained there.

So, with week 1 of our explicit vocabulary instruction under our belts, my grade 5 class were hopefully ready for me to introduce five new words: satellite, inundate, hypothesis, distraught, and impact. Two of which are from our Science topic list, not just from the resilience list. I left last week’s word cards on the board and hung up some anchor charts for those (more about that later) as reminders then began as I’d begun the previous week, with a cloze activity.

We discussed possible answers and what type of words we were looking for. Sometimes it wasn’t clear in the sentence what word type was required. For example, one of the sentences I’d written in week 1 was:

The firefighters moved ……………….. to get to the trapped people.

In my mind the answer was clearly debris, but most of the student’s suggestions were adverbs, such as quickly and carefully.

The students did exceptionally well with guessing the words this time, listing three target words in their guesses and they were all rather chuffed when I revealed the list words. This meant the session went very quickly and finished on a very positive note.

We managed to get all five words into their vocabulary books in half the time it took last week, although some students forgot to write their sentences. Doing this on Tuesday meant plenty of time on Wednesday to go over misconceptions, correct spelling, and add missed sentences. When students looked for dictionary definitions to support their guesses at word meaning it made it really clear that often dictionaries are obfuscatory. I don’t really like child-level dictionaries for upper primary because they never have difficult words in them, but adult dictionaries are impossible to interpret – sometimes even for adults. However we shared ideas, read what we could and came up with sensible definitions. Using google also provided plain-word definitions that were much easier to understand. Thank goodness for the convenience of iPads! 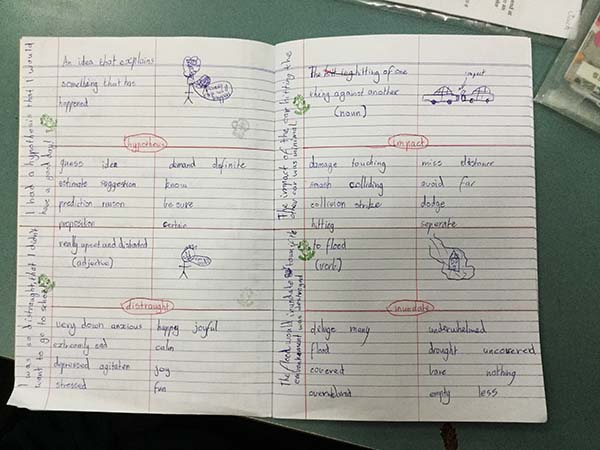 We played Pac Man, which is a very simple game that can be used in  any subject area. Students spread out around the room so they can’t touch anyone and they stand still. I ask questions, if they get them right they get to take a step, if they can reach another student they tap them and the student sits down. I asked questions like:

Students love this game, and having the words on the board was good for reference. I used words from both the first and second week and plan to add on as we go through the term. The more students hear, say and write new words, the more comfortable they are with using them independently. In the Word Nerds book the authors recommend getting students physcially moving through a range of activities as this helps students retain the words. We’ll see!

The game was fitted into a spare 15 minutes before recess – these vocabulary sessions might sound long in my descriptions but they’re quite quick in reality.

I typed up a cloze passage and asked the students to work in pairs to list the words in order of use. 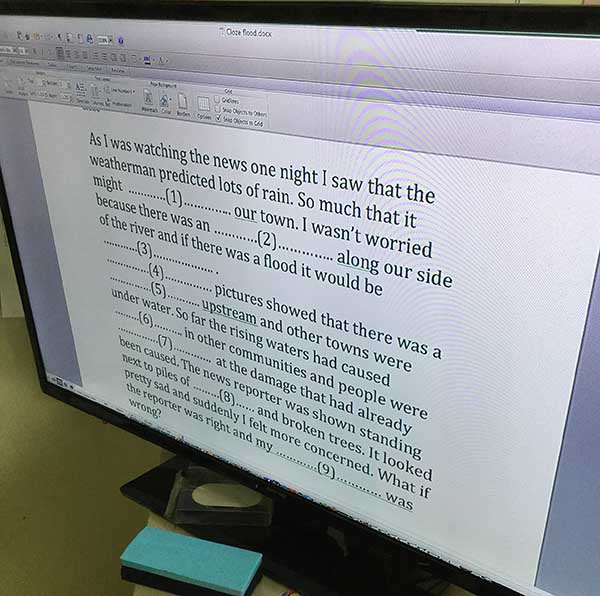 There was lots of really good discussion. Although I made this activity up on the spur of the moment, I think it worked really well because it was short and the students really talked about their choices with their partner and had to go back over the sentences several times because a few of the words were quite similar. We marked as a group, shared ideas then chucked the scraps of paper in the bin. So easy! I was particularly excited to see students getting out their vocabulary books for reference and drew attention to this by rewarding students who took the initiative with Class Dojo points.

So that’s most of what we’ve done so far, the only thing to add is the anchor charts.

These are an idea from the book but I changed it slightly. They recommend putting lots of words on a poster to keep the vocab within view. I thought I’d make one small poster for each word and show the synonyms and antonyms but I’m starting to think I’ll end up without enough room on the walls. We’ll see I guess.

On a personal note, this focus on vocabulary has made me more aware when I’m reading. On the weekend I started reading The War of the Flowers by Tad Williams. It’s a fantasy novel and I wouldn’t have said it had particularly challenging language in it, but when I paid attention I found seven words I didn’t know in the space of perhaps 10 pages. Coincidentally, one word, Cibola, was also part of the title of my current audio book (Cibola Burn by James SA Corey) and I’d assumed it was a made-up word. Turns out it’s the name of one of the seven legendary cities of gold in South America, which include El Dorado. Seriously – wow! By looking up just one word I’ve discovered meaning in two places at once, that there were seven cities and I’d assumed there was only one, that it’s really worth finding out the meaning of new words and also I’m a doofus. Clearly I’d been skimming over these sorts of words most of my reading life – or hoping the meaning would become obvious at a later date – which admittedly it sometimes does. There was another word (noun phrase?) Tir na nOg, I’d seen quite a few times but never looked up. Turns out it’s a fabled faerie land of  eternal life. And Broceliande? A gorgeous-sounding forest of French legend, possibly where Merlin was buried. Such richness! Such depth! As a word nerd myself, I really welcome the reminder that words are beautiful and clever and that choosing not to expand one’s vocabulary is like choosing to paint with only half a palette.

Let me know your thoughts in the comments and here’s the next post on this topic.